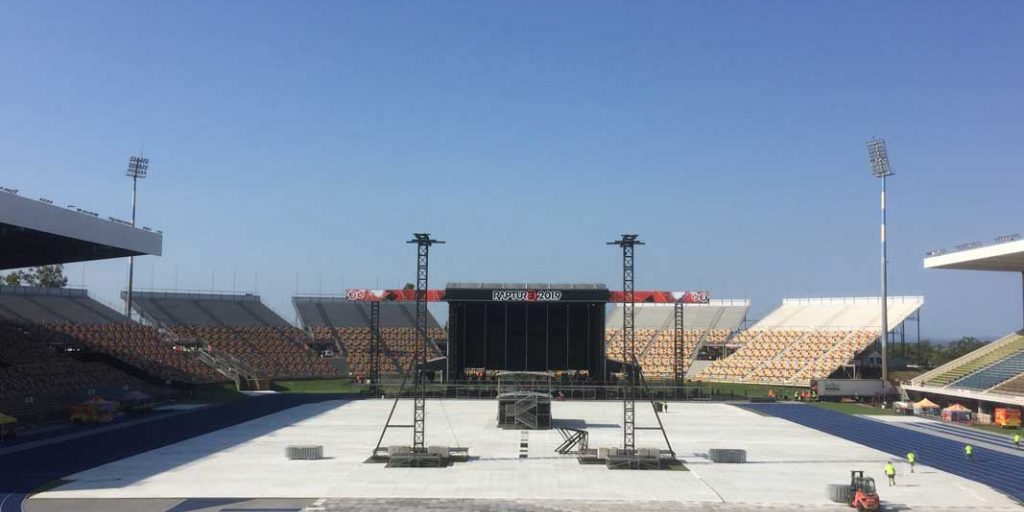 The 2019 season for Melbourne based No Fuss Events has been one for the record books, beginning with the national turf protection contract for Phil Collins (Suncorp Stadium, Adelaide Oval and AAMI Park), two Bon Jovi shows (Suncorp Stadium and MCG), the WWE at the MCG and Foo fighters, Taylor Swift and RMIT graduation at MARVEL Stadium.

In just one month, No Fuss Events was faced with the enormous task of supplying nationally to the Nitro Circus Tour and the Eminem Tour of Australia, according to director Geoff Tucker. “Over this tour 9,000m2 of drivable roadways and more than 54,000m2 of pedestrian turf protection was laid with 108 trucks consigned, 20 flights taken and in excess of 5,650 hours worked on the ground,” Geoff said.

“To say the feedback from these stadiums and the promoters was positive would be an understatement. Eminem played to the largest crowd ever to attend a show at the MCG and the turf replacement was less than has ever been achieved. With in excess of 17,500m2 of turf covered at the MCG and 2,100m2 being drivable floor a result of less than 600m2 of turf replacement required is previously unheard of and certainly unexpected with five delay towers built and cranes on the field of play for in excess of 22 hours.”

No Fuss Event Hire has a proud history in the provision of services to major events in Victoria and in more recent years across the entire nation. The company has always taken pride and great care in the supply of cutting-edge products, excellence in customer service and a transparent relationship with a diverse range of clients, Geoff said.

Traditionally a supplier of grass protection products primarily for pedestrian access, it was not until 2012, when the discovery of a product used in London’s Hyde Park, turned the company’s fortunes around. Company directors Geoff Tucker and Dorothy Mahony decided to attend the Rod Stewart concert in Hyde Park prior to leaving London. While Dorothy was focused on the distant stage, Geoff was down on his hands and knees examining and photographing the flooring which was protecting the grassed concert space. It took some 12 months to secure the new products in Australia and for No Fuss Event Hire to become the appointed Australasian agent for those products.

“With the introduction of temporary turf protection products superior to anything available globally to Australia, No Fuss was awarded its first national contract for the supply of stadium turf protection in 2017 for the TEG Dainty Guns n Roses Tour, taking No Fuss to QSAC in Brisbane, ANZ Stadium in Sydney, the MCG in Melbourne, Adelaide Oval in Adelaide and Subiaco Oval in Perth,” Geoff said.

“The products and services provided were unlike anything the stadiums, the promoter and the production crew had experienced previously,” Geoff said.

“Reputation led us to secure supply to the Guns n Roses tour, plus many stadiums including Central Coast Stadium for Lionel Ritchie, MCG and Suncorp Stadium for Bon Jovi, Adele at Optus Stadium, along with all shows held at MARVEL (previously Etihad) Stadium including Adele, Ed Sheeran, Justin Beiber, Taylor Swift, UFC, and RnB Fridays, among others.”

The company’s two other arms operate independently and saw No Fuss Event Hire supply temporary grandstands at the Avalon Airshow and Formula 1 Australian Grand Prix with some 14,000 seats flanking the circuit; managing the Country Racing Victoria Mobile Facilities Program since its inception approximately 16 years ago as well as the supply of temporary flooring products to the Moomba Festival, Victorian Caravan & Camping Show and the Avalon Airshow.

“Our capacity and capability to service multiple major events concurrently is unrivalled with delivery and superior service the hallmark of our ethos,” Geoff said.

The No Fuss team now includes 50 permanent staff who place emphasis on properly preparing for every job, and enjoy being motivated by outcomes of every new challenge.

“The entire staff take this culture to all job sites no matter how large the job, remote the location or obscure the request from our clients. We will continue to show and strive for excellence in all areas, whether it be building marquees for Country Racing Victoria, building temporary or retractable grandstands, the supply of temporary turf protection to stadiums and events or being the logistics partner of the Hire and Rental Industry Australia’s HIRE19,” Geoff said.